Home » Pieter Malherbe: Relentless entrepreneur. Renegade to some. Call him what you will.

Pieter Malherbe: Relentless entrepreneur. Renegade to some. Call him what you will. 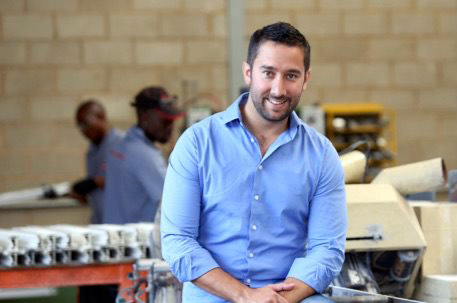 Relentless entrepreneur. Renegade to some. Call him what you will.

Pieter Malherbe is as patriotic as they come. Born and raised in the Free State, Pieter used his middle-child position in his family to catapult him into business at an early age.

While a high school learner, Pieter and his family domestic worker started a very lucrative business buying and re-selling blankets when he was just 16 years old.

Pieter made a decision to study only what he liked and graduated from the University of the Free State with a BComm, majoring in Marketing, Entrepeneurship and Industrial Psychology. And while he had a degree in hand, he was not quite convinced that he would be able to find suitable employment, mostly thanks to his self-confessed ‘ADD, itchy and impulsive ways’.

This itch was finally scratched, after being employed in various industries, when Pieter decided to start his own business in 2006 called TEVA Windows, a manufacturer and supplier of energy-efficient windows and doors.

No R&D. No financial planning or projections. No concept of the market size or appetite. So three years down the line, the business was ailing and in need of a bit of rejuvenation. The business moved from its Jet Park operations to his partner’s garage and after only managing to draw a salary five out of 12 months at a time, it was time for radical shift.

“But I believed back then, as I do today, that true entrepeneurs ‘suffer’ from an irrational self-belief. So even when things are not quite as smooth sailing as we would like it to be, we stick it out.”

It took three more years before TEVA’s fortunes changes when a new partner and investor joined the business and offered Pieter the much needed business mentorship to transition the business from ‘barely breaking even to measurable profit’.

“Entrepeneurs are born out of a need or peeve. Grow up in Bloemfontein the way I did, survive nail-gnawing cold winters and you would also want to create something that changes all of that.”

“I’d say to any inspirational business-owner or entrepreneur, look at that part of the world you live in. And create solutions. And if you can’t create it, find someone who can. Start your own business. Be a The South African government requires that all new commercial and residential property developments, including renovations, use energy-efficient job-creator, not a job-seeker. And find good mentors. Sure, you will make mistakes. Many, as I did. But stick it out. Every business has to pay its school fees one way or the other. But mentors are able to cushion the knocks and help you to maintain the irrational self-belief we all need to succeed in life.” – Pieter Malherbe

We use cookies on our website to give you the most relevant experience by remembering your preferences and repeat visits. By clicking “Accept All”, you consent to the use of ALL the cookies. However, you may visit "Cookie Settings" to provide a controlled consent.
Cookie SettingsAccept All
Manage consent

This website uses cookies to improve your experience while you navigate through the website. Out of these, the cookies that are categorized as necessary are stored on your browser as they are essential for the working of basic functionalities of the website. We also use third-party cookies that help us analyze and understand how you use this website. These cookies will be stored in your browser only with your consent. You also have the option to opt-out of these cookies. But opting out of some of these cookies may affect your browsing experience.
Necessary Always Enabled
Necessary cookies are absolutely essential for the website to function properly. These cookies ensure basic functionalities and security features of the website, anonymously.
Functional
Functional cookies help to perform certain functionalities like sharing the content of the website on social media platforms, collect feedbacks, and other third-party features.
Performance
Performance cookies are used to understand and analyze the key performance indexes of the website which helps in delivering a better user experience for the visitors.
Analytics
Analytical cookies are used to understand how visitors interact with the website. These cookies help provide information on metrics the number of visitors, bounce rate, traffic source, etc.
Advertisement
Advertisement cookies are used to provide visitors with relevant ads and marketing campaigns. These cookies track visitors across websites and collect information to provide customized ads.
Others
Other uncategorized cookies are those that are being analyzed and have not been classified into a category as yet.
SAVE & ACCEPT